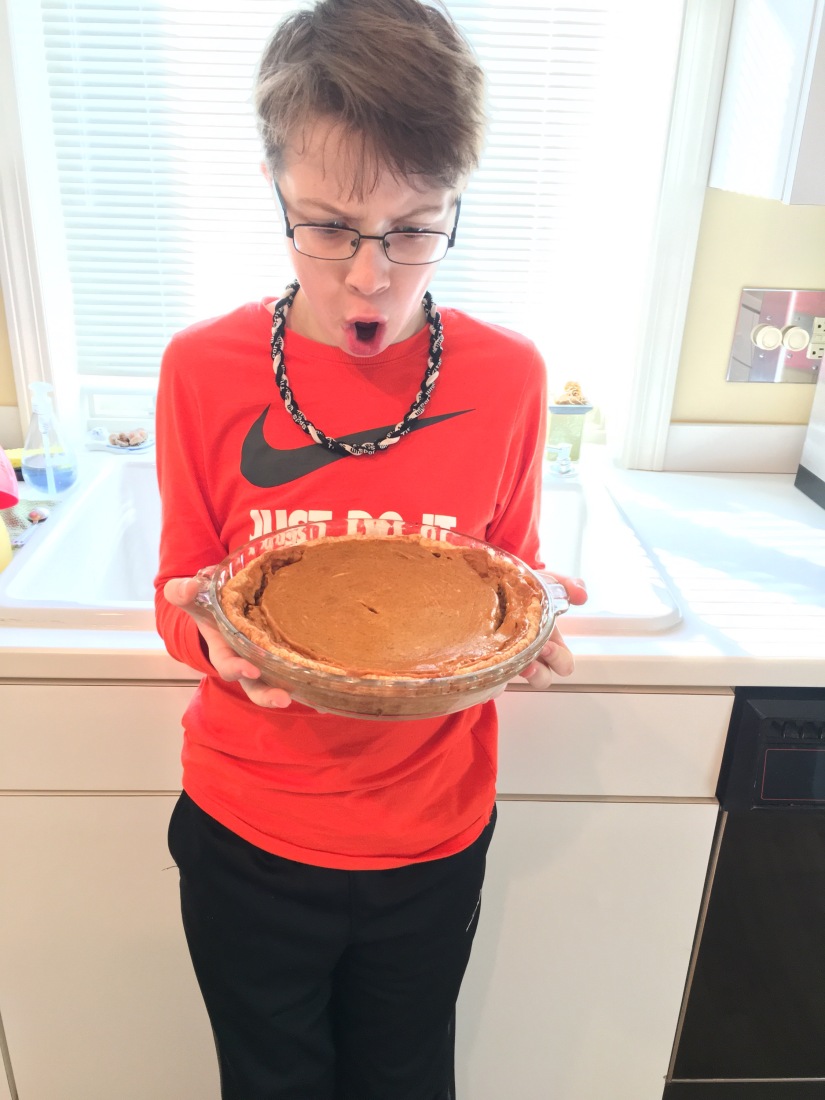 Which is to say, we don’t have any, but would certainly like to hear yours if you want to share in the comments!

Jack and I don’t really do anything special on Thanksgiving. Either I cook and invite some family over or we go to someone’s house. I make corn soufflé and apple leek stuffing and a few pies. That’s about it. We don’t play football or watch football or really do anything regularly each year except eat and clean. Or maybe drive.

This year, Jack made the 2 pumpkin pies all by himself and wanted zero help. He forgot the eggs which occurred to me as I put them on the oven. SoInquickly pulled them out and added two eggs to each right in the pie plates. That was pretty funny. We tasted one last night and seriously it was the best pumpkin I ever tasted. Better than my own even though he used my recipe!

Jack was sort of careful with measurements so some spices spilled over the edges of the measuring spoons. Whatever he did really worked! So he was really proud of it. 🙂

I made sugarless apple pie and that is always good. Like seriously good. You do not need sugar in that pie people!!!

We woke up this morning and decided to get some exercise by taking a walk around the block. We played frisbee as we walked. Jack got bored after 2 houses. Sigh…

me: We just left! No, we’re doing this walk.

me: So let’s walk slower.

me: After we walk. Sure.

Jack: Sigh…Go across the street and I’ll throw the frisbee to you. (He proceeded to throw it behind me so I had to stop, turn around and go pick it up after every two steps.)

me: Jack, throw it ahead of me so I don’t have to go back and get it. (He then threw it to me at an upwards angle so it boomeranged back to him just missing my outstretched hands each time.)

Jack: You have to jump mom!

me: Throw it straight with a wrist flick, not a full arm swing. Then it’ll reach me.

Jack; You didn’t teach me frisbee you know. That whole flick thing isn’t teaching me anything.

me: Try it. (He flicks his wrist and all the throws go perfectly to me.) See??

me: Let’s run to the corner up there and then do a spectacular frisbee throw at the end.

Jack: No.  I have a cramp. From walking.

me: Which way do you want to go? The end or up the hill?

And there you have it. Our new “tradition”. We went back home and ate some more of Jack’s pie. Yum. Now in the car to drive to another state!