Wednesday! Halfway through the vacation week!

We had a full day today with a Tour for Muggles (Harry Potter walking tour), visited Abbey Road (Beatles, people!) and did a Ghost Bus Tour (nighttime bus ride with gristly details of London’s murders and notorious characters.

Another great day in London! We Ubered the heck out of this day!

We ate THE best burger of my life at Byron burger near Leicester Square. Actually it was near the bookstore alleyway that was the inspiration for JK Rowling’s version of Diagon Alley. Such a good little tour this morning.

I thought the ghost bus tour was a little Corny but Jack really liked it! I was worried he would be scared…

me: Jack are you ok with this?

me: I don’t know…we’ll have to wait and see.

Jack: Look it up!

(The other people on the bus had a chuckle at that)

Tired and leaving you with some pics from today. Nighty-night! 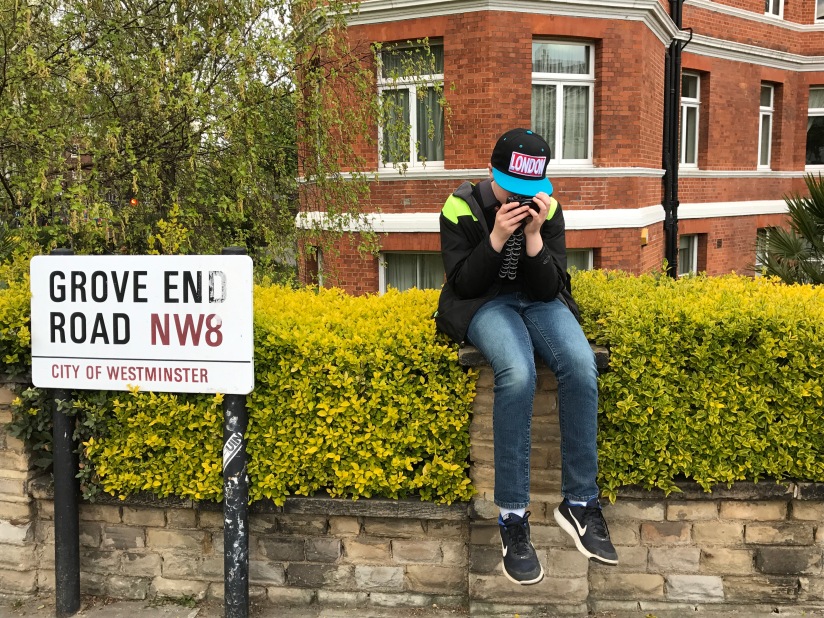 Jack and I just watched the 5th Harry Potter movie. Really good! Which means… Jack finished reading book 5 this weekend, of course. He rarely waits more than a day after finishing the book to start begging to watch the movie.

We had a power outage right in the middle of the movie, which sucked, but it came back on after a couple of hours.

In the meantime I grilled salmon and potatoes plus we had shrimp cocktail. Yum! I’m more motivated when it feels like I’m camping. I also had Jack practice his forms for his black belt test which is in… Gasp… 2 weeks !! Mine too, actually… :O

I even built a fire in the fireplace so we could read later if the power stayed out. Now we have full lights plus a roaring fire and it’s 80 degrees out. Oh well..

I asked Jack to sum up the movie for all of his blogger fans. I couldn’t get much out of him…

Jack: I liked it. It was scary in some parts.

And there you have it. Lets see if his estimate holds true. 🙂

Jack kind of gave up on those. I may try to coerce him for this last book, but he’s already finished up 732-ish pages of Book 4 and dove right into Book 5. Over 800 pages yo!

Last night we watched the movie. I liked it, just as I did in theaters. Ahhh Cedric Diggory… how you’ve grown…

After you died of course. And moved on to become eternal.

me: Jack, it’s okay. He didn’t really die you know.

me: Was it scary?

Jack: No, because I read even scarier stuff in the book!

me: Well, I had to think about it. I figured if you read the book, and were scared or had trouble with any parts, you would tell me, and then maybe I’d hold off on the movie for awhile. But you seemed okay.

Jack: It’s cool how people can pretend to be dead.

me: Well, it may look cool, but it’s just acting.

Jack: How did he know when to die. Did he see the actual spell come out of the wand?

me: That was fake too honey. Probably added in by computers at the end. Someone told him “when you hear this noise, fall down and play dead” or something.

me: Don’t you need a break?

Jack: Nope. And I’m telling you, this one better be just as good!

I’ll have to get Jack to write a review of the HP books ASAP. He’s devouring them!

I mostly read book one to him at bedtime because I really wanted to get him interested. At first he couldn’t stand the thought of reading about wizards, much in the same way that I couldn’t stand wizards about 10 years ago…until I got past the first chapter and was of course hooked. And of course I was much much older when I was reading the series.

Jack loved book one and immediately started book two. I read some to him but he did a lot on his own at home and at school. Then, after watching the first two movies, Jack grabbed book three and is now almost done. I haven’t really read to him at all from this book so I’m sort of lost again. Oh well.

Jack: I’ll just read the rest of the books by myself, ok?

me: Why? Then I won’t remember what the heck is happening.

Jack: Wellll… You read kinda slow and I don’t like how you change voices and try to do a fake British accent for Hagrid. (He thinks of something…) And you can just wait and see the movie!